In this Artist Spotlight I’ll be interviewing Sean Fulton.

Sean Fulton is an American painter, born and raised in Kansas.  He is known in several online communities, including CMON, WAMP, and Reaper, and goes by Jabberwocky.  Sean has been painting miniatures since he was a teenager back in the mid to late 80′s. He took a hiatus once he graduated high school and began painting again in 2001.  Sean currently resides in the Kansas City area with his wife and 4 children.

1. You started painting minis as a teenager in the 80′s.  How has the hobby changed since then? 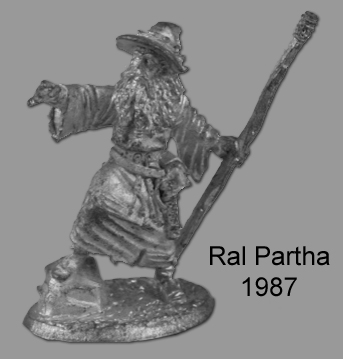 It has changed in so many ways! When I first became interested in miniature painting, I picked up some Grenadier and Ral Partha models. The models themselves were much simpler (and smaller) then. Every mini came with a simple “flat” or “broccoli” style base. Models today have so much more detail than the older models. I think this is a combination of improved materials such as plastic and resin to model with, better casting techniques, and just so many more skilled sculptors willing to push the envelope. The techniques have really blossomed in the past 10 years, which I firmly believe is directly related to the internet and the ease with which one can learn and share new techniques. The other big change in my opinion is the use of basing to really tell a story; minis aren’t just little toy soldiers any more. They are works of art.

2. What are some of your favorite paints and tools?  Do you favor any particular brands?

I don’t limit myself to any particular brand of paint, but far and away my most numerous paint bottles come from Reaper. I like the triad system, the dropper bottles and the way they thin with water. My brush of choice is Winsor and Newton Series 7, but I have kept these in good shape for over 5 years, so I haven’t tried anything else.

3. What about the minis themselves? Any favorite manufacturers or sculptors?

I have a broad range of minis. Just based on sheer numbers, I probably have more Ral Partha/Grenadier minis than anything else. I bought quite a few box sets back in high school. Most of them are rather poorly painted and have suffered the wear of tabletop play by a group of teenagers 20+ years ago. Since I really got back into painting around 2001, Reaper has gotten most of my attention. I like the variety and I’ve never been a miniature gamer. I also have a fairly large number of Wyrd miniatures. I have a fondness for the line, but the bulk of my miniatures have come from store credit from the various Wyrd contests over the years. I have a some GW minis, all from 40k range. I have a handful of models from other manufacturers that have caught my eye, but most of those are still in blisters.

I wouldn’t say I have a favorite sculptor, but Jason Wiebe seems to bring out the best in my brush…

4. How do you select minis to paint, and what inspires you for any given artwork? 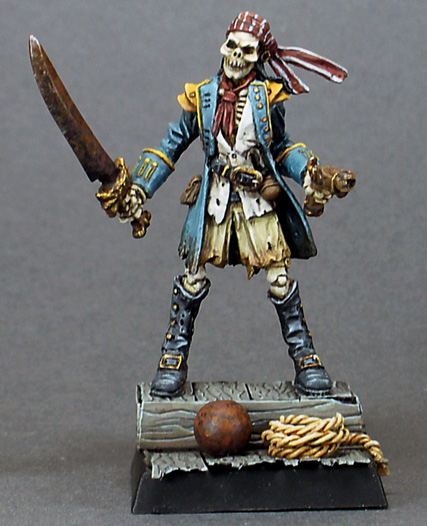 I generally paint for two reasons: competition and gifts. When I first took up painting again in 2001 I really wanted to improve myself and found the best way to do that was to begin painting for online competitions. It pushed me to try new techniques. My other big motivator is for gifts. I’ve done them for family and friends, various online charities and mini exchanges, and coworkers. My inspiration comes from online sources, since I really paint in a vacuum. CMoN is the greatest source, but the boys at Massive Voodoo crank out helpful stuff at an incredible rate. I also draw from friends I’ve made in the various forums and those whose works I admire. I will sometimes send them a PM or e-mail to ask advice or opinion as a piece of mine as it goes through the WIP stage. The global mini community is pretty darn friendly, all in all. I’ve not had a bad experience yet asking for someone’s opinion privately.

5. You painted a studio job for Easternfront Studios. Have you painted officially for any other manufacturer?

Not in an official capacity. Quite a few of my models are present as painted examples in the Reaper online store. My recent Shroud that I painted for the Wyrd Rotten Harvest this year will also be used as a painted example in the online store, I believe. Even the EFS paintjobs were not a formal commission, but were done essentially as a gift for the owner of the company.

6. Tell us about your workspace. Do you have a dedicated mini painting area?

I am fortunate enough to have a good sized area to paint. I have the luxury of being able to keep my paints out and not pack them up when company is coming :). I have two 4×6 foot tables side by side along a wall. I keep my paint in a large paint box and the tools/basing materials in shelving below the tables. I have a small photo setup next to the paint area and in an adjacent room, a computer and bookshelves to hold my completed minis. 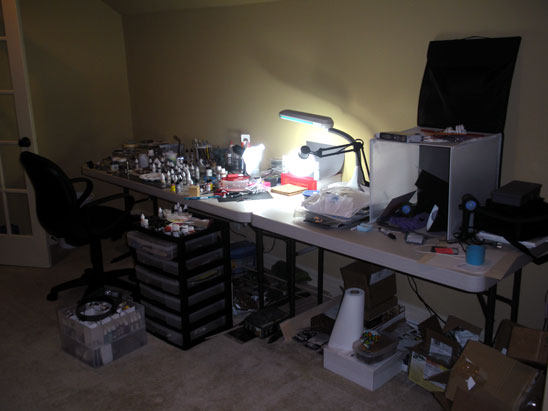 7. How do you find time to paint, and how does your family feel about your hobby? Have you gotten your kids into it at all? 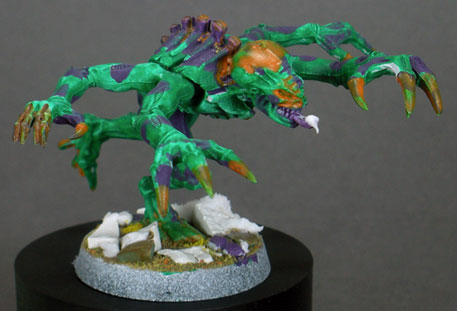 It has definitely gotten more difficult as the number of children has grown! I mostly paint in short spurts of 30 minutes or an hour here or there, two or three times a week if I am lucky. I generally will paint to wind down before bed. My wife has been supportive of my hobby; it was one of the reasons she fell in love with me, I’d like to think. I’ve painted a few miniatures for her over the years and have actively tried to “immortalize” her in little ways. One of the Wyrd masters, Sonnia Criid, was named after my wife Sonia. Nathan Caroland, the owner of Wyrd had decided to have a contest to name a new miniature. I submitted Sonia’s name and gave the reason why. I didn’t end up winning the contest (it was Misaki), but he was kind enough to instead name one of the masters in this little game he was starting up called Malifaux. The rest, as they say, is history.

My oldest son painted briefly, but he’s into other things now with his friends. My oldest daughter has done a bit of painting. I love her take on things. My favorite piece of hers was a GW Tyranid genestealer catching a snowflake on his tongue. Ahh, the innocence of youth! My younger daughter is just getting to the age she could start doing some painting. Just a couple of weeks ago I got a Pegasus for her. My youngest just turned one, so he’s more interested in eating the brushes then painting with them.

8. What do you consider your best works? Can you tell us something about them?

My favorite piece was a miniature I painted for my not-yet wife. She is Korean and loves elves so I painted one of the Reaper Vale elves to look like her and put “Strength”, “Wisdom”, and “Beauty” on the base in Korean. My best is a tough one. On almost every piece I try to do something new. My best freehand would be the CAV Dragonfly I did for the 2009 ReaperCon. My technically best piece is probably the skeletal pirate I did for the Wyrd Rotten Harvest in 2010. I was really beginning to make some better blending at that time and I The drunken pirate I did for the latest Reaper online contest is my best diorama type piece.

9. What is the origin of your online handle, Jabberwocky? Is it just a reference to Lewis Carrol, or does it have some other meaning for you?

It is a reference to Lewis Carrol. I always liked the way it sounded. It could be easily shortened to “Jab” or “Jabber” on the forums.

10. You recently won first place in Reaper’s online summer painting contest for your Drunken Pirate tableau. Have you won any other awards for your painting?

Between life and living in Kansas City (not really known as a big mini painting town), I’ve largely been able to compete only in online contests. In addition to this year’s win in the Reaper Summer Online contest, I also won Best of Show in the 2010 Wyrd Rotten Harvest. I’ve also won or placed in some smaller online contests at WaMP, D20 Gamers, and Miniature Heroes as well as a couple of local game store contests. I did go to ReaperCon in 2009 and brought home the gold Sophie in the “Machines of War” category with a CAV dragonfly. I would love to travel to Adepticon, Gencon, or the Golden Demon someday and compete there, but only time will tell.

Thank you, Sean, for taking the time to answer my questions!  It’s great to learn more about some of the great painters out there, and you are definitely one of them!

Thanks again for the interview.  It was an honor and I really enjoyed it!