I did a quick paint of a harpy miniature for gaming. She doesn’t have a fancy base, and I didn’t even carve off the mold lines. I put in a lot of effort on the paint job in some areas, but didn’t bother in others. I pretty much did what I felt like doing with it until I was tired. :-)

She’s topless, and my blog auto-posts to Facebook, so I’m only including a photo from the back here. Look in my gallery for the complete set of photos. 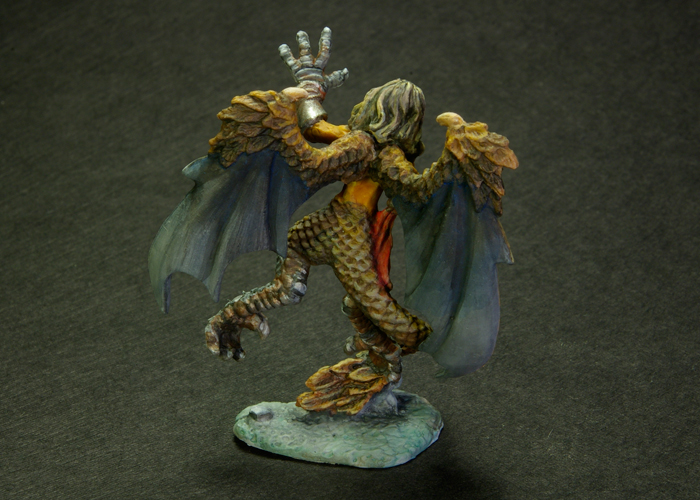 I worked on the base some more, to add some interest, and tie in the colors better: 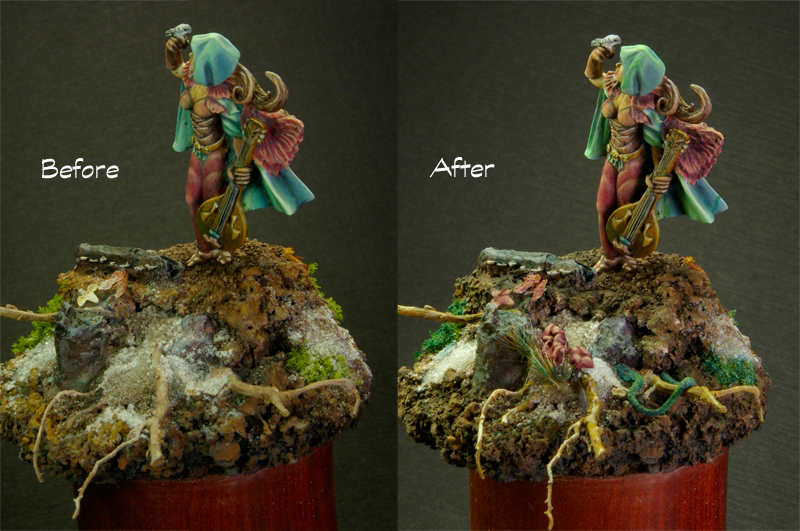 When Reaper released this miniature (Lady Moray), I was thrilled. She looks just like my very first D&D character, a bard named Valanth Mocnjay, who has a pet mockingbird. I bought the figure right away. I didn’t like the long knife (short sword?) she was holding in her left hand, so I converted it to a lute I had in my bits box, which I thought more fitting. 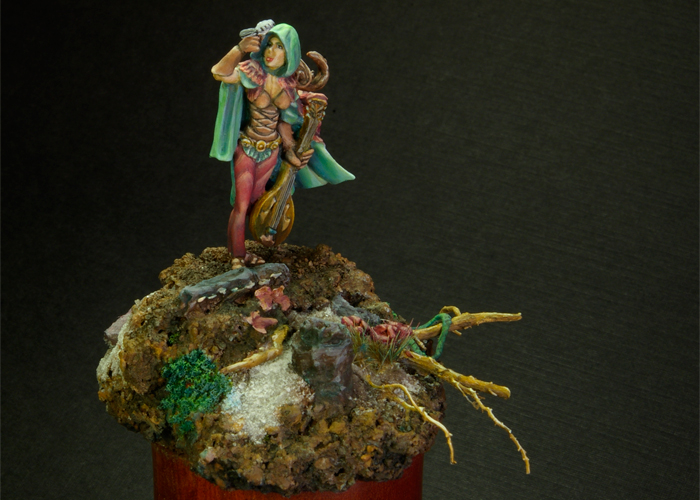 Mary is twirling as she sings the Magnificat with joy! The scene is perfect, and so much better than I imagined it! Thank you, Andy! 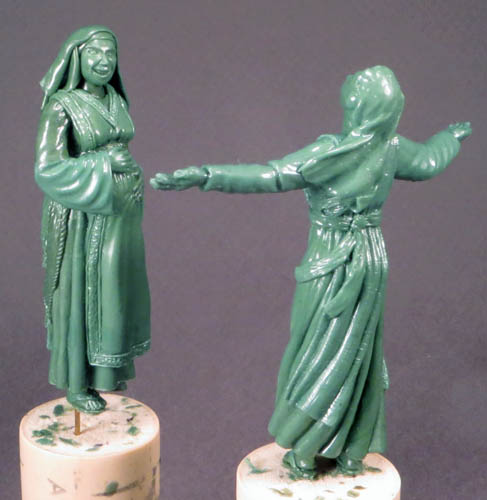 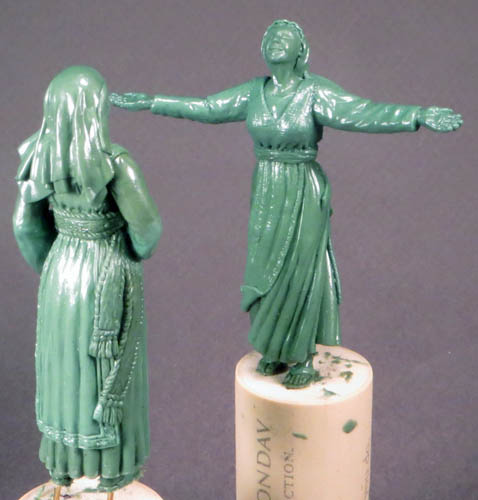 This is Reaper’s Eye Beast (a.k.a. Beholder). It’s a Reaper Bones miniature, which I glued onto a Secret Weapons Miniatures base, to which I added some green stuff to integrate them into a unified whole.

View more photos in my gallery. 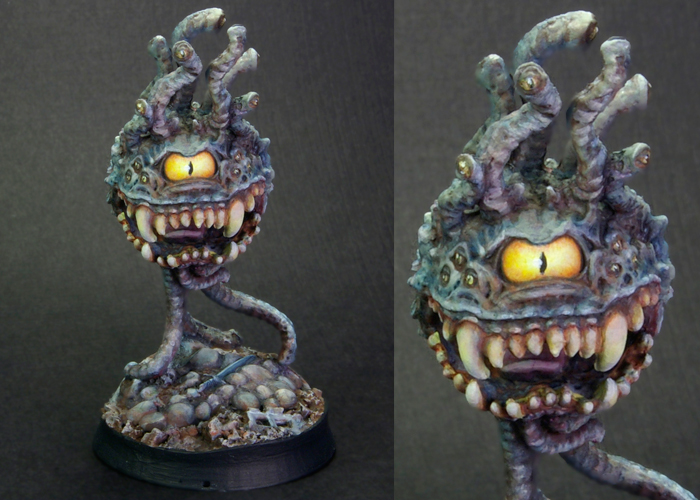 Elizabeth is done!!! Oh, she is so perfect! I am as excited as can be. Andy is doing such a phenomenal job on this! 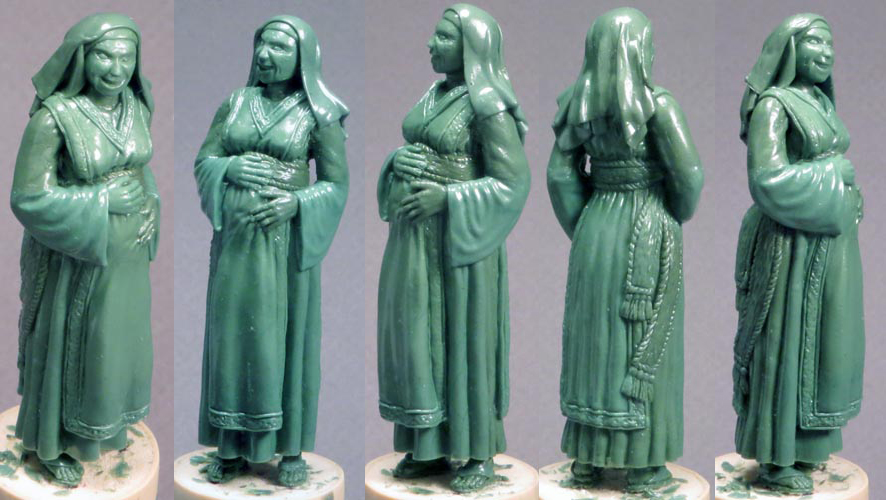 This one is another speed paint for gaming. I wanted for a while to try painting a miniature with an almost-all brown palette, and with this mini in the queue, it seemed a good match. I think I probably painted him better last time, which was three years ago, but I spent many, many more hours on it then. This one probably took about 5 hours, not including basing.

I made a custom enlarge base again, too, which is becoming standard for my fighter-type gaming figures.

See more photos in the gallery. 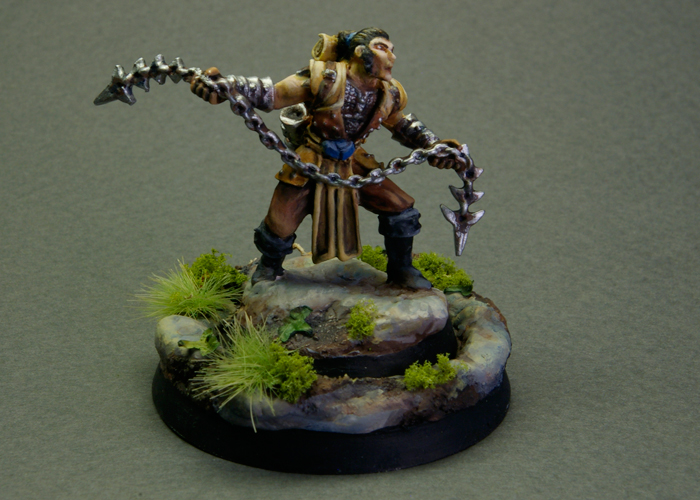 This isn’t a miniature, but it’s a creative project. My son John was picked to be the Itsy Bitsy Spider in his school play, and he need a costume spider costume. I used the sewing machine my husband got me for Christmas (which I love!), and you can see the result below. The best part about this costume was the cost: $1.75 for sweatpants, turtleneck, and 2 pairs of tights at a thrift store. 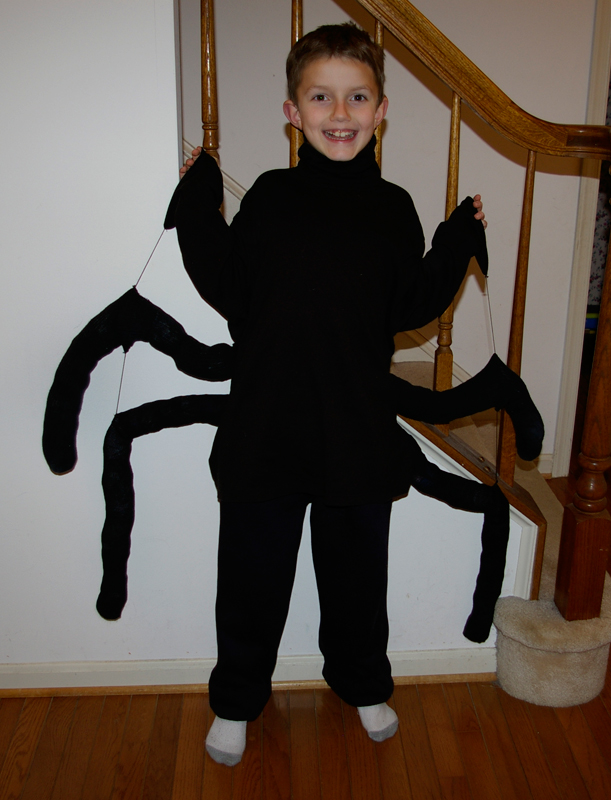 Posted in Life in General | 2 Responses

My Mom got me a wonderful surprise for Christmas this year. She commissioned my friend Andy Pieper to sculpt me a 54mm Visitation scene, based on Luke 1:39-55. Mary, having just been visited by the Archangel Gabriel, travels to visit her relative Elizabeth, an elderly woman pregnant for the first time after her husband Zechariah was visited by the same Angel six months earlier. When Mary arrives, St. John the Baptist leaps in Elizabeth’s womb in the presense of the unborn Jesus, and Mary raises her hands to Heaven to sing the Magnificat. I am very excited about the project, and have been emailing Andy about the particulars.

Andy is posting a WIP on Sculpting the Visitation on the Reaper forums.

Here is a painting of the Visitation. It’s not exactly what the sculpt will look like, since the scene will be right after the two women greet one another, when Mary is singing the Magnificat, but it gives you an idea: 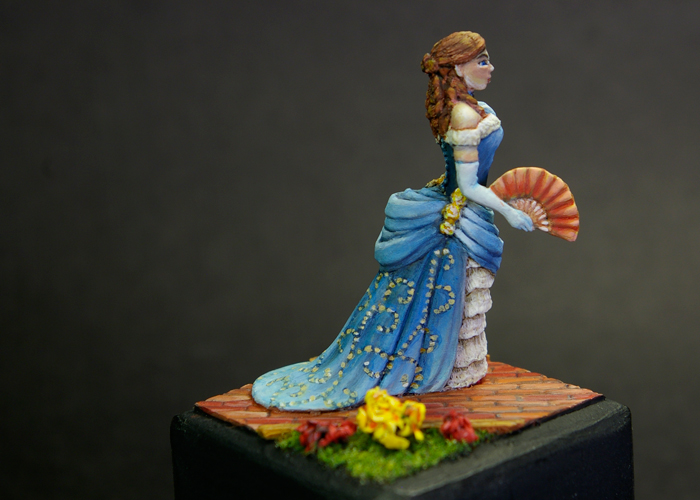