I painted the two policemen. I’ll probably touch them up some more before I call them done, and I want to make the OSL stronger on the scene as a whole, but I’m making progress.

And the rat is too big. I tried sculpting one, but it was a mess. I think I’ll probably just pull him off and put some trash there instead.

I thought the diorama looked wrong with walls where the scene is “cut off”, so I did the miniatures basing thing of black flat panels. I glued some plastic sheets on the sides and painted them black. The floor, walls, and door of the apartment are not painted yet, because I haven’t decided yet how to paint them! I worked on the OSL (object-source-lighting), but it still doesn’t look quite right, so I’ll put more time into that at some point. I also wonder if that dire rat is too big for the scene.

I started painting the first policeman, light in the front, since the lamp is in front of him, and dark behind, where he’ll be in shadow. 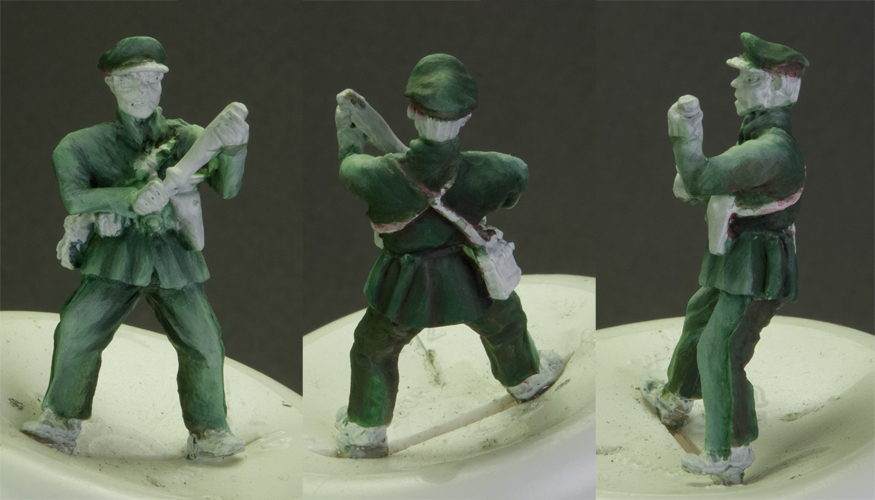 Here are two more figures speed-painted to represent my friends’ D&D characters. They are both from the Reaper Bones line of spin-cast plastic figures. They required no primer. 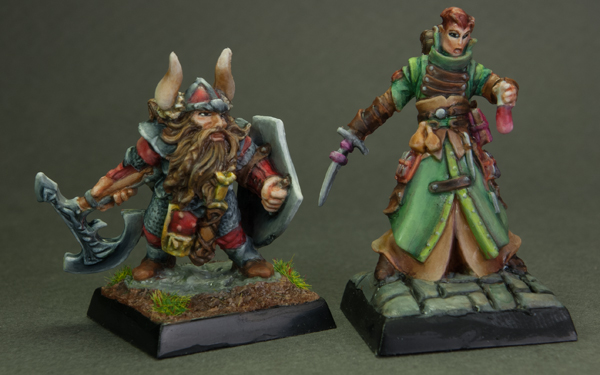 More photos of both in my gallery: Dwarf, Alchemist

Cecilia, the Hefty Halfling is a D&D bard/fighter character I am currently playing. She once got the party into a fight with killer mushrooms when she tried to collect them for a stew. And when the battle was over, she still made her stew.

This is a Reaper figure from their new Bones plastics line, with minimal prep. I didn’t use any primer, but I did glue her to a gaming base, and extended the base she came with into more rock and dirt using green stuff. I missed a mold line or two, but otherwise, she’s not too bad. The surface was not as smooth as polished and primed metal, but for a tabletop mini, that’s ok.

My friend bought the Bones Kickstarter set, and I’m on deck to paint all the minis for our gaming group’s PCs, so I’m not putting in a lot of time on each one. This one took me 4 hours, including prep. 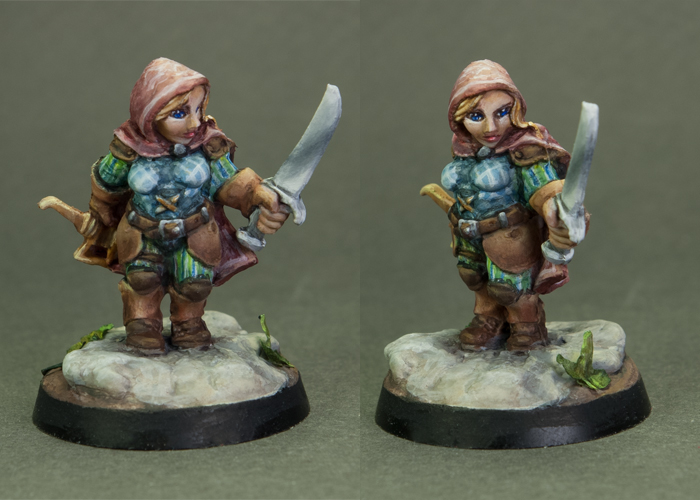 I’ve started painting the base. I need to increase the contrast between light and dark if I’m going to use OSL. I especially need to highlight around the brick-wall lamp. Of course the lamps themselves only have a base coat, and I haven’t even started on the interior of the apartment, but it’s coming along, I think. The blanks spot on the ground is for a rat, another Reaper figure from Legendary Encounters:

I’m using the one that’s standing on its hind legs, and I’m repainting him, of course. 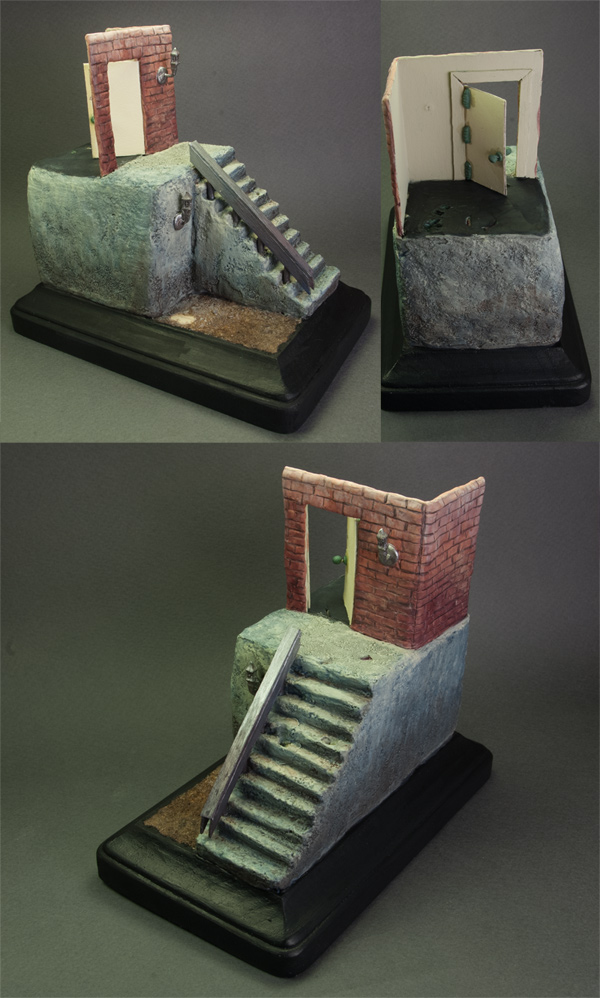 My gaming group usually plays D&D, but we make an occasional foray into Mutants and Masterminds, a superhero RPG that is loads of fun. My character is Gale Force Fury, Master of Wind, a horribly campy blue-costumed crusader, who says things like, “When trouble calls, G.F.F. is your B.F.F!” and “Gale Force Fury, Away!”

All of her powers are air-based, and Reaper Miniatures has a figure called Twister that is supposed to be an air-controlling super heroine, but she looked too sexy and provocative for Gale, who is more like an awkward band geek than a tempting vixen. They have another figure, though, called Inferno, a fire-based heroine, who was a much better fit, if I could paint the flames as a blast of air.

I only spent about 3 hours on her, which is a speed paint for me. She’s just for tabletop gaming for myself, so I didn’t want to put in more time than that. What do you think? Does Inferno work as an air-controlling superhero?

See more photos of Gale in my gallery 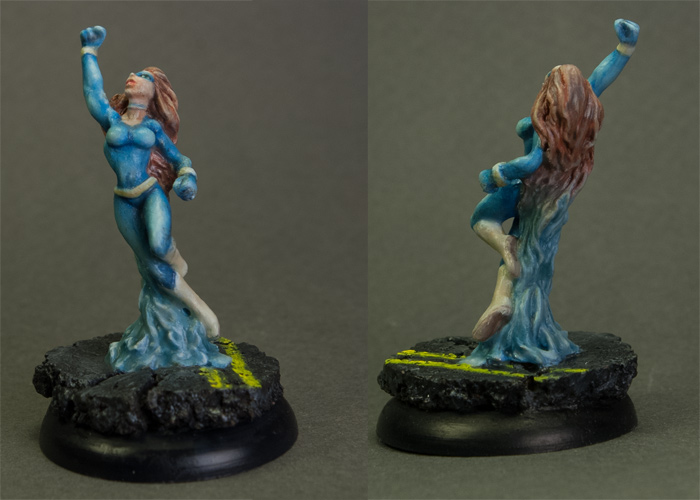 I used some green stuff for the floor of the apartment, and to create a brick outer wall. I’m not sure if it looks quite right, but the wall comes out, so I can easily replace it, if I decide to do that. I fixed the girl’s thumb, and made holes to insert all the minis into the base. I also made the lantern copy. 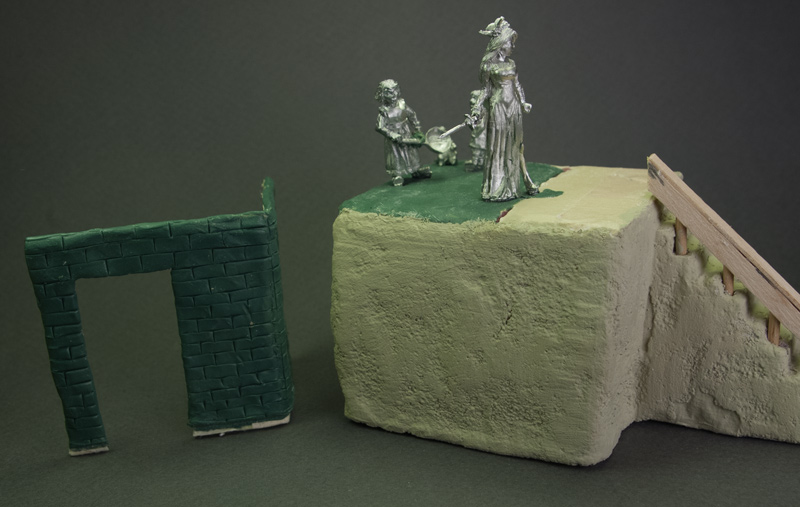 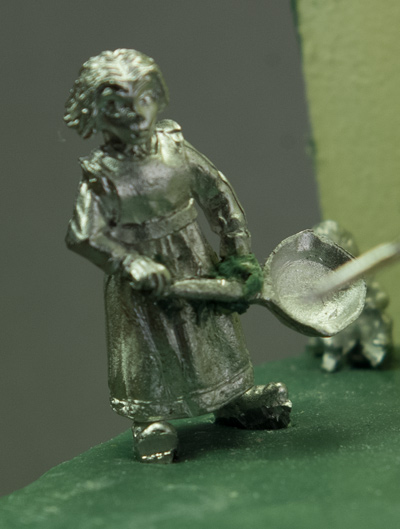 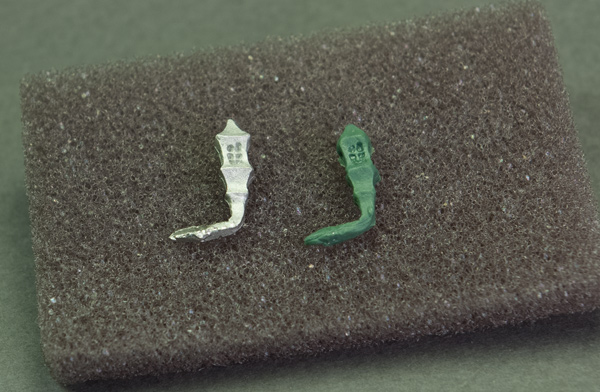 Since guns are illegal in China, I converted the Mom’s gun to a long knife. I also converted the little girl from feeding chickens to holding a frying pan ready to defend her siblings. (I realize now from the photo that I put the girl’s thumb on the wrong side of her left hand. I’ll have to fix that!) 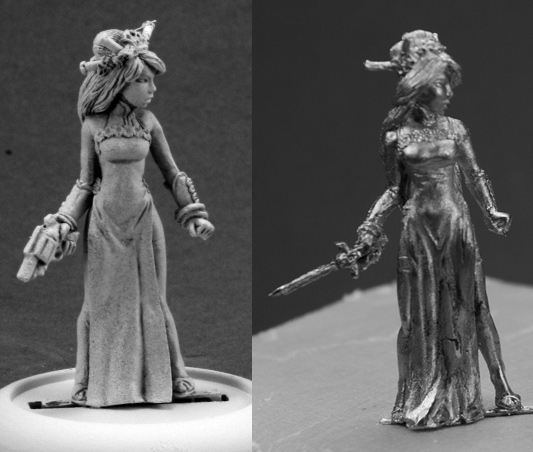 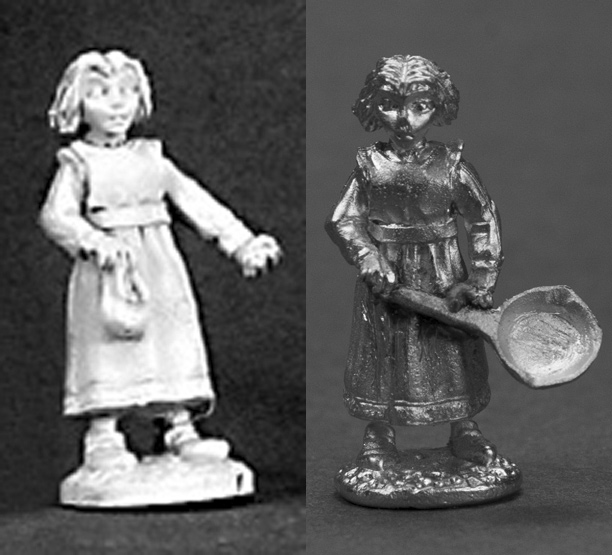 I was going to cover the steps with spackle, but when I went down to my basement to get it, I discovered it was all dried out. I looked up a recipe for homemade spackle, made of flour, salt, and water, and tried that. It has a very rough texture that doesn’t sand well, but it works for rough concrete. I also added a railing to the stairs, using toothpicks and coffee stirrers. I didn’t cover it all with craft paint yet, so you can see the homemade spackle underneath. 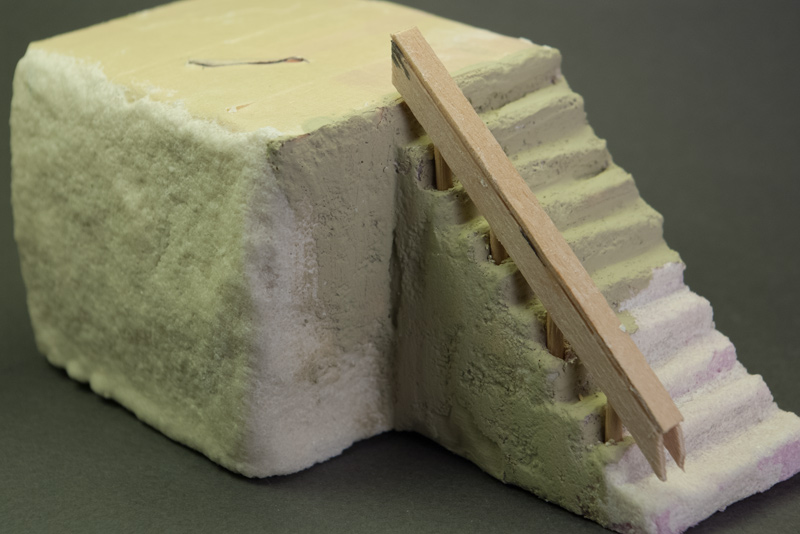 Now, I was going to move the Mom behind the door, since she was holding an illegal weapon, and it would add more drama to the scene that way. But after the weapon conversion, and considering that the Mom is the focal point of the diorama, I wanted her to have more visibility. Here’s the final placement I’ve decided on. The door will be opened in, blocking the kids from view by the intruders. 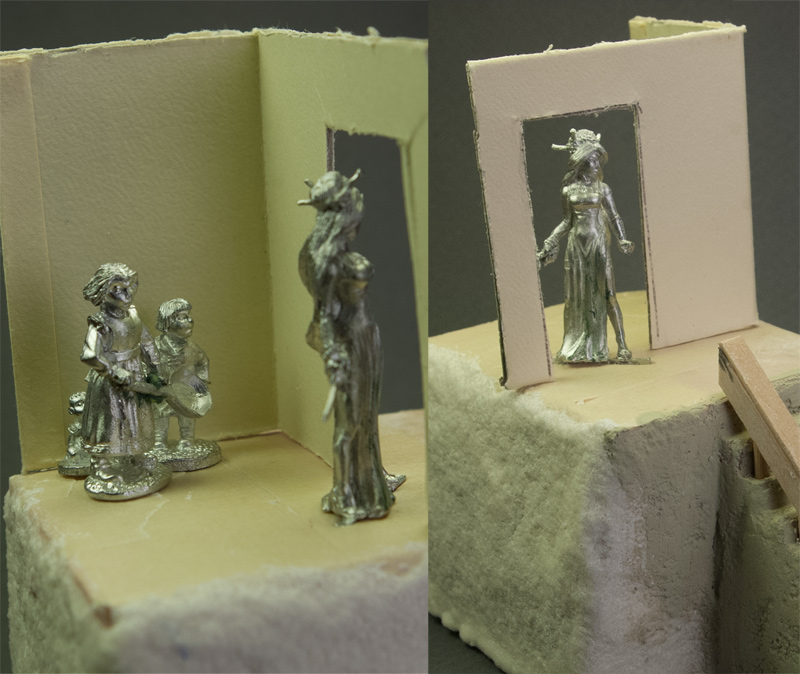 St. Patrick got some love tonight at our FLGS (Friendly Local Gaming Store), which hosted a painting night. 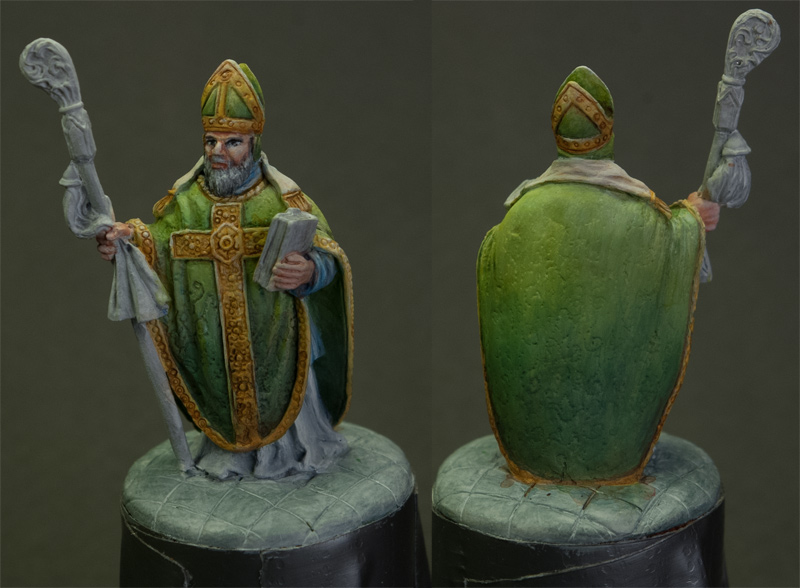 The police officers are now fully converted and primed. 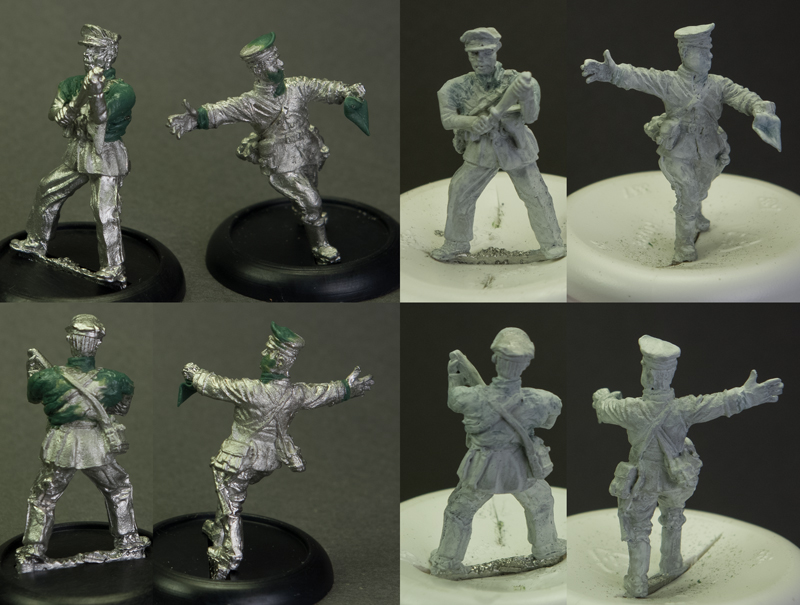 Here’s a “rough sketch” of the diorama, but thanks to some fantastic advice from my good friend Andy, I think I’ll move the wall forward and put the mom behind the door, which is slightly ajar. The officer will be shoving the warrant in her face, and she’s looking out, holding the gun out of sight. The scene would be much more dramatic that way. 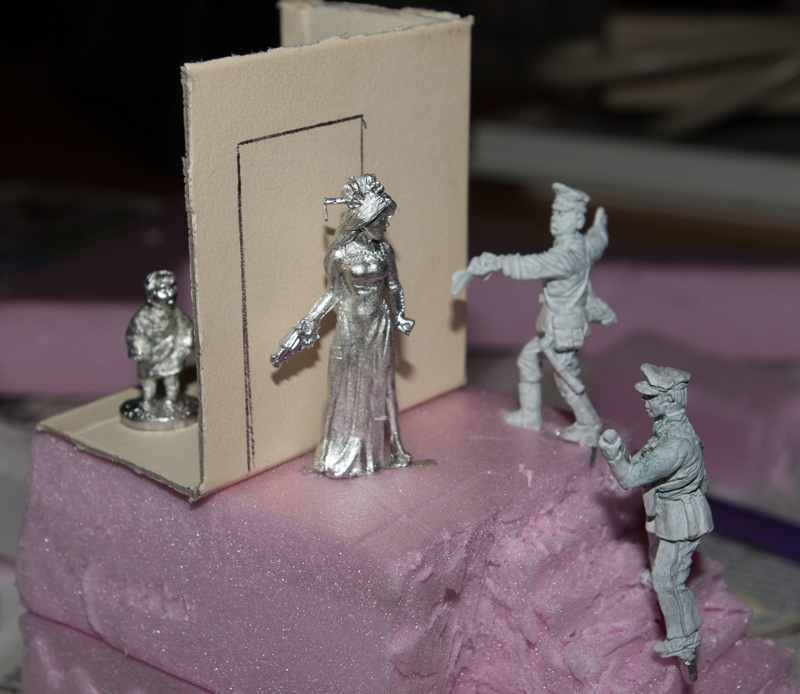